Ellie and Abby are typical American kids. They do typical American things, like play sports, participate in school plays, play the flute, study hard, and hang out with their friends and family. They’re also excited about being Catholic kids, and got a chance this past Holy Week to act in imitation of Christ on a very special mission trip planned by their father, Joe. While most kids are enjoying Easter break by sleeping in, visiting family, going to Florida, or hanging around the house doing chores (!), Abby, Ellie, her dad, and a family friend named Doris went to El Salvador to visit an impoverished village, Doris’s home.  What they found there surprised them, touched them, strengthened their faith in God, and motivated them to live out their Catholic faith generously.

When they first arrived after a long flight for their weeklong mission experience, Ellie, 12, admits she was a bit unsure when she stepped foot into the poor village.

“I was surprised,” she admitted. “I sat in a hammock and I thought it would be horrible. I saw cockroaches. There were dogs roaming the streets.” She said the houses were made of cinderblock and metal and were all really close together.  At 6:00 in the morning, people would honk horns selling bread and milk.  Three hours earlier, roosters crowed, waking them all up and making it hard to sleep. 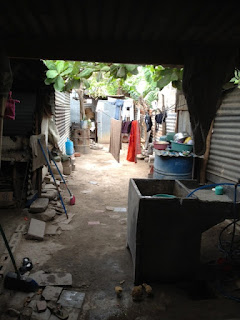 Her sister Abby, 13, was also skeptical when she saw the house they were all to stay in for the week.

“It was completely different compared to our world. I had a picture in my mind of how the house would be like, but my mouth dropped open, literally. It’s not what I had expected. It was small, there were mosquitoes everywhere, and the bathroom and the sink were outside. It was really hard to process. I thought, How am I going to stay here for a whole week?”

Abby said she wanted to go back home, saying the whole area was a little hard to bear at first. Then she got to thinking.  “They had all the necessities for us,” she said. “The house was crowded, but they were willing to share their food and drinks, all the necessities we needed. They were really nice.”

Ellie changed her mind, too. “I thought, I should be happy here because I am so blessed. There were so many nice people that I was happy to be around them.”

She said she started to get an open mind about the food and the culture in the El Salvadoran village.  “It’s a wonderful country,” she said, remembering the willingness of the people to share their tortillas, beans, noodles, rice and cheese.

It was hard for the girls to speak the limited Spanish they knew, but even with the language barrier, they were able to make friends with the people they were helping. They quickly became friends with a fun-loving boy named Oscar, with whom they found a common love for soccer.  Outside on the warm, dusty roads, the kids would all gather together to have fun. Abby and Ellie were delighted when Oscar, 13, climbed up an avocado tree to get them avocados.

“We had fun wherever we went,” said Abby, who enjoyed seeing a volcano and going to the beach. “The people were all very friendly and very inclusive. Oscar would let me kick the ball and he’d kick the ball back. I felt included in the things we did.”

As part of their mission trip, the girls brought donations of money and boxes of toys, clothes, and shoes for the residents, many of whom have nothing.

“These kids don’t have any shoes, sometimes they don’t have stuffed animals,” said Ellie, who befriended a 14-year-old girl named Veronica and thrilled her with one.  “She had never had a stuffed animal. She was so happy.”

Ellie told a story of giving a chocolate bunny to a young boy who had never seen one before. “He was jumping up and down for this chocolate bunny. He was just so happy.”

Abby felt thankful for her many blessings as they handed out the baby clothes and toys to the children.  “These kids were jumping up and down,” she said. “They were so excited. Even toys like a ball, they’re just happy to have one,” she said. “I was able to hand out the toys. I was very involved in the community and the church and it was a really good experience.”

Throughout the week, the girls made friends and helped out where they could. They shared their culture and their language while they learned about one so different from their own.  They enjoyed seeing lots of processions in the street during Holy Week which included saying the rosary, floats with saints on them, music, and the Blessed Sacrament. The Easter Vigil was completely in Spanish, and while it was challenging for them, they knew the “Our Father” and some of the songs. The girls even sang a solo at Mass— the song “Digo Si Senor,” which they had learned in Spanish class at Catholic school back home. 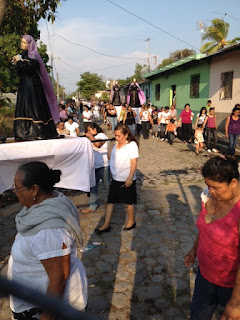 During Holy Week, the village in El Salvador had processions that included the Blessed Sacrament.

When the busy week drew to a close and it was time to leave, the girls grew sad.

“I would definitely go back,” said Ellie. “I want to live there.  I feel like everyone was so friendly. The houses may be small, but it’s really inspirational to see these people. They have a hard life but they are so happy.  And they are not spoiled at all. They live day by day.”

Abby also said she’d like to go back to El Salvador someday.

“Giving money to the church showed me how much they needed help.  I really liked helping them. Giving a toy to another kid who doesn’t know you or speak your language made me feel special to share. They just brightened up my day,” she said.

As they all gathered in the street to say goodbye, it was bittersweet. An 8-year-old girl named Daisy especially made an impression on Abby.

“Daisy was the cutest little girl I’ve ever seen, ” she remembered.  “She came to say goodbye and gave me a hug and I felt so happy and warm inside. It was probably one of the best moments I’ve ever had. Just seeing her come to me and actually caring made me so warm inside.  I gave her my purple bracelet as a reminder of me, because she was wearing purple.  I won’t forget her.  The fact that she came over is what counts.”

I think Abby and Ellie certainly are great kids, living out their faith, leaving the comforts of home to embrace a culture so different from our own, to help those less fortunate.  They are living out the Gospel message…and in the words of Abby, that IS what counts.