Now I am going to him who sent me; yet none of you asks me, `Where are you going?’ But because I have said these things to you, sorrow has filled your hearts. Nevertheless I tell you the truth: it is to your advantage that I go away, for if I do not go away, the Counselor will not come to you; but if I go, I will send him to you. And when he comes, he will convince the world concerning sin and righteousness and judgment: concerning sin, because they do not believe in me; concerning righteousness, because I go to the Father, and you will see me no more; concerning judgment, because the ruler of this world is judged. “I have yet many things to say to you, but you cannot bear them now.”
The Gospel according to Saint John 16:5-13

Jesus knew when it was time to ascend to Heaven and leave His disciples but He sent them His spirit, the Advocate. We can trust that when Pope Benedict leaves the papacy today, that the Holy Spirit which guided the once fearful apostles to the four corners of the earth where they joyfully died for Christ will guide the conclave as they elect a successor to our beloved Pope.

I am sad in the wake of Pope Benedict’s departure from the papacy, and yet my heart is full of gratitude for the blessings our family has received from his pontificate.

It began eight years ago on a lovely April morning in 2005, I watched the morning news and told my three girls, “No, it doesn’t look like they will be a new pope today.” We went to walk the ocean beach near our home on Long Island with our two black Labrador retrievers. A warm breeze cleaned out the winter cobwebs, and when we returned home, the phone was ringing. My breathless friend had wonderful news: Cardinal Ratzinger has been elected our new pope, Pope Benedict XVI! I was delighted since I knew Joseph Ratzinger was my beloved Pope John Paul’s closest associate, well familiar with the problems of our Church and devoted to Sacred Tradition as expressed in the Liturgy and the catechism. I knew we could expect great things from this pontificate, however brief. We celebrated his election with all our hearts.

One summer morning, I was in Massachusetts at Morning Star Camp for girls, picking up my daughters from a week with the Slaves of the Immaculate Heart of Mary, an order of sisters who attend the Traditional Mass. We knelt on the soft pine needles beside the outdoor chapel by the lake for Holy Mass, and the priest announced with joy in his voice. “Today the Holy Father has made the Traditional Mass widely available”. It was 7-7-07. Soon Mass in the Traditional Form was springing up like spring flowers all over Long Island, and home-schoolers were proud to note that the altar boys were being trained to serve and the girls learning Latin hymns and chants were our children, those who had learned and cherished Church tradition in our homes. Now we had the joy of sharing our love for the beautiful Latin Mass with our friends. We thanked Pope Benedict in our hearts for this great opportunity.

April 2008 found my oldest daughter Gabriela and I traveling to St Joseph’s Seminary in Dunwoodie,  New York with thousands of youth to meet with Pope Benedict who was visiting the USA. We sat in the unseasonably hot sun for hours, waiting for limited food and drink with patience, all the while watching the jumbo trons for a glimpse of the Holy Father. First he came to greet children with disabilities in the Chapel which we watched with anticipation. Here is a photo montage of the event. 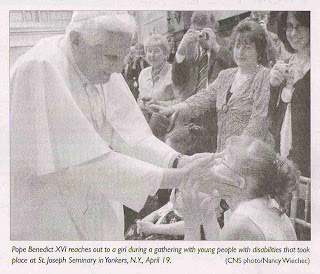 And here is an article I wrote for the National Catholic Register entitled, “The Pope of the Young”with interviews of the young people in the montage. The most beautiful rapport developed between the young people surrounding the stage and the Holy Father. But the most touching moment for me, mother to ten year old Christina with Down syndrome, was captured in this news story, in the chapel, a young lady with Down syndrome presented the Holy Father with a gift book, then reached up and encircled him in a bear hug, as we watched in the crowd, many were tearing up at the sight of spontaneous affection. Did you know the Holy Father had a cousin with Down syndrome who was taken from his family as a teenager by the Nazis? I can only imagine how much love he holds in his heart for children like my Christina, they sense it and give him hugs whenever they can. I wrote about it in my bookA Special Mother is Born.

My family was touched deeply in eight years by  Pope Benedict, and we pray the new prayers in the Novus Ordo Mass every Sunday, remembering his great love for the Mass and his pastoral care for our souls.

God bless you as you climb the mountain of the Lord, Pope Benedict to pray for us. We will pray for you.

We will miss you and cherish our brief time with you looking forward to our reunion in Our Father’s House. Thank you for your great love for Christ and His Church and for being a faithful laborer in the vineyard of the Lord.

Leticia Velasquez is a wife and mother to three girls. Christina, her youngest, has Down syndrome. She is the co-founder of KIDS Keep Infants with Down Syndrome. Leticia blogs about daily life with Christina at Cause of Our Joy, and Causa Nostrae Laetitae. is her Culture of Life blog. She reviews books and films at Catholic Media Review. Her articles have been published in Canticle, Faith and Family, and Celebrate Life  magazines, and the National Catholic Register . You can find her work online at Catholic.net, Catholic Exchange, and Catholic Online. The Velasquez family lives in rural Connecticut.