Frequently I like to mention my little “helloes” from our friend St. Therese. Well, her sense of humor came out in full force one morning in October. I can just picture her little smile in Heaven as she watched this all unfold!

I went to daily Mass one day, all the while feeling unsettled and a bit sad…for many reasons. I decided it was time to ask the Little Flower for some help from God. “And this time,” I pleaded with her, “can you send something big? A big shower of roses is what I need, Little Therese, if you don’t mind. Something very obvious, out of the blue. You know what I mean.”

After Mass I had to do some errands and found myself in front of store doors with signs that read, “Open at 9:30.” I checked my watch. It was 9:15.Slightly frustrated, I went back to my car in the howling wind and rain and sat there watching the rain hit my windshield. I decided to wait it out in my cold car, rather than come back later in the day. As I sat alone in the silence of my car, I happened to notice that the front of my car was surrounded by pink rosebushes.

Wow, she works quickly, I thought. I was touched. It hadn’t even been a half hour since my request.  I thanked St. Therese, but I still felt a little sad. I had asked Therese for something big. A long row of rosebushes certainly qualified as a shower of roses, especially in late October, but at that moment, it wasn’t enough.

I went about my day and nothing more happened that would qualify, so I decided to put it out of my mind, knowing that Therese works in her own good time, as commissioned by God and what He wants.

So the next morning when I stumbled sleepily into the kitchen at 6:00 a.m., looking forward to a hot pot of coffee to start my day, I wasn’t thinking about Therese and her shower of roses. I opened the cupboard where I keep mugs and glasses, and out of the blue, a mug came tumbling down from the shelf. I grabbed it in the nick of time, with a yelp at the shock at something that had almost whacked me in the head. What on earth? This has never happened before. I’m always so careful about putting these things away...

I looked down at the mug I had managed to catch before it had crashed to the floor. In my hands was my St. Therese mug, and the words on it read: 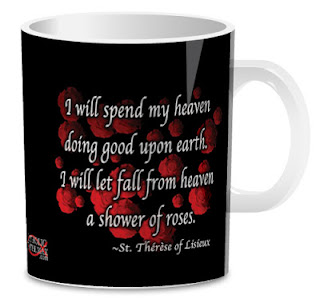 She had answered my prayer and had sent me a shower of roses. It appears our little friend St. Therese has a sense of humor, wouldn’t you agree?