An experience can be worth a thousand words, so I’d like to share small pieces of our tour of Ireland as we prepare for the upcoming celebration of Saint Patrick’s Day. There are so many great articles out there about who Saint Patrick was and what he did, so I’m not going to try to recreate the amazing depth of them here (for a great one, check out Wikipedia). The history of this amazing country is so, so rich compared to what we have in the States – and the beauty of their faith from hundreds of years past is evident everywhere in this amazing country. Celebrating Saint Patrick’s Day to us in the States is often more about green beer than the honoring of a man who brought Christianity to a country of Druids, and the Christian faith of the Irish is – literally – everywhere in their lush country.  That being said, there are still fun projects you can do to incorporate the shamrock when teaching your family about Saint Patrick like a handprint pot o’ gold rainbows, a smiley orange handprint leprechaun, or a rainbow & pot of gold cake!!

One of the things Saint Patrick is known for is for the way he taught. He took something that was everyday and made it extraordinary: the three leafed clover. The shamrock (or clover) can be found all over the lush landscape of Ireland, so St. Patrick used it as part of his teachings in his efforts to spread Christianity in the Druid-heavy country. Legend says he taught the Irish about the Holy Trinity by pointing to the three leaves on the shamrock…though the three leaves are separate (Father, Son, Holy Spirit), they all make up one single shamrock (three persons as one God). The sacredness of the shamrock is seen in so (so!) much of the architecture there, such as the border on the statue of Mary and the fence posts around one of the many churches in Kilkenny. 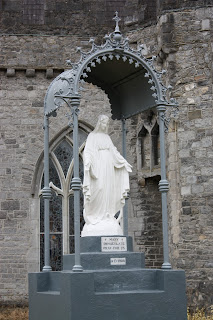 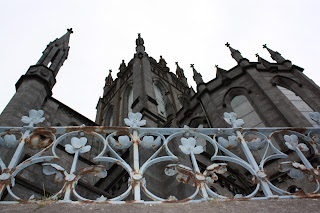 We loved how their Christian faith was everywhere; one afternoon, while walking through downtown Cashel, we happened upon this detailed carving of Christ on the cross. It reminded us of the constant, ongoing battles we have in the States over the extreme separation between church and state – sometimes, at the expense of historic preservation. 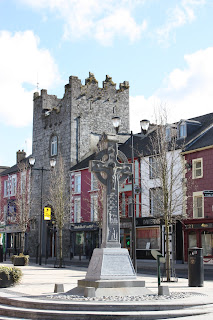 To describe what celebrating Saint Patrick’s Day was like in the heart of Dublin…words can’t express! The streets were packed with revelers with no room to walk – and your ears were full of the sounds of every foreign language around. As you slowly made your way through the sea of green, German, French, Dutch, Slovak, and more filled your ears. 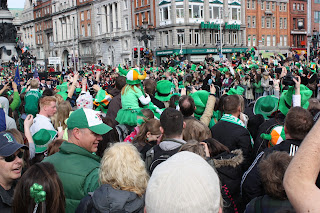 The parades started early in the morning with the celebrations continuing throughout the day. We took in about an hour of the parade and headed to the Guinness Factory (what better way to celebrate?!?) and were again stunned by how beautifully this country embraces their faith! As we enjoyed a complementary Saint Patrick’s Day Guinness at the factory, we heard the powerful sound of Gospel being sung. Leaning over the rail, we watched a chorus perform beautiful renditions of Ave Maria coupled with upbeat worship and praise sounds. As we looked around, we saw in others’ eyes how much the, too, were truly touched by this beautiful sound! Seeing a gospel choir performing inside a brewery in honor of a Saint was definitely not something we were accustomed to! 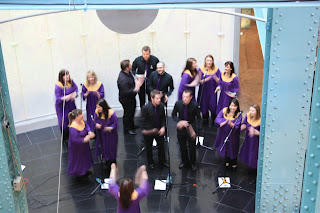 Ireland is such a beautiful country, so full of history and faith! That’s not to say it’s without it’s battles, though – the struggles between Protestants and Catholics have very deep roots, and many of the tours we went on said these battles run strong even today (though they’re taken out on the rugby field as opposed to the battle field).

…and with that, I leave you with a traditional Irish blessing:  May the sun always shine on your windowpane; May a rainbow be certain to follow each rain; May the hand of a friend always be near you; May God fill your heart with gladness to cheer you.