Money might have been tight in our large family and life a bit messy, but our lives were filled with activity and fun because God’s creatures were part of our lives. Animals helped transform us into a playful and joyful family who sensed the Love of God in, with and through our pets.

The simplest way to play with kids is in nature, especially with pets or farm animals. Have you noticed how a toddler delights in the mere glimpse of a dog or cat? Even a goldfish on the counter or a hamster in a small apartment will fascinate a small child with their antics. For our family, joyful living meant welcoming animals into our lives. Pets, farm animals, not to mention untamed pests crowded in along with nine kids on our hobby farm. 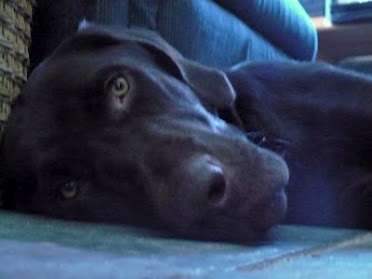 Just coming through our front door without tripping over our huge but cuddly ‘guard’ dog was a chore.

Shadow was a humongous, drooling black lab mix, with overgrown feet and a clumsy personality. He was part of my children’s lives for 13 years. This dog was the most quirky, annoying pet we have ever owned because he was messy, bossy and slightly dense. However, Shadow was a faithful companion, giving and receiving unconditional love. As our children reflect back on this pet, they simply conclude Shadow was an integral part of every family moment.

After any visitor climbed over Shadow, he could not sit for five minutes without Rebecca’s cat jumping on his lap. He was certainly distracted by Daniel’s guinea pig squeaking for veggies every time the fridge door opened and he probably became dizzy watching Iggy, Mary’s rabbit, chase the dog around in circles. In our house, love must have encouraged the prey to become the predator. 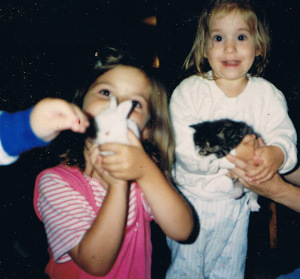 Why did we have so many pets?

We believe kids need to relate to animals to grow up into balanced, caring adults who can relate and feel connected to the natural world not just technological society. Just watching our children’s delight in pets and farm animals confirmed how important animals were to their development and happiness.

Michael and I love animals almost as much as we love kids.

That love has been a powerful source of Divine energy transforming both animals and children into confident, intelligent beings with strong, unique personalities. Our livestock kept us entertained with their antics even more than our more traditional pets because well-loved farm animals want to part of the family, too.

Take Daisy, the socialized goat with a charming personality. Daisy hated to be imprisoned in the barn. If she hadn’t seen anyone in a long time, she’d bleat until one of the children at least poked their head out of the door and talked to her. She would have made more friends if she had quit eating my flowers or stealing little people’s hats and pulling on their scarves. Consequently, most of the time we tied Daisy to a post so she could see family life but not cause too many problems. However, a couple of times a week we let Daisy follow us around in the garden. As long as she mainly ate weeds, we let her hang out with us.

One afternoon, Moonlight, our ancient but regal Arabian stallion, was plaintively looking through the window. He looked so forlorn all the kids begged to let him step in for a cuddle one cold afternoon. I finally relented, inviting the huge animal to step into the kitchen to eat a carrot and soak in a bit of love for a while. Moonlight then passively followed us out afterwards.

Starlight always wanted in the house too. As soon as he was in the yard either before or after the kids had ridden him, he tried to open the door to the house by biting the door knob. Once he actually managed to turn the handle and open the door, much to everyone’s’ delight. However, we made sure he didn’t pull that stunt again because it was not easy dragging him out. Starlight had a mind of his own. 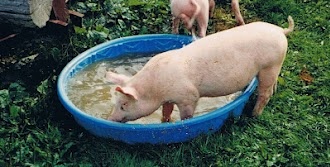 Michael literally loved his intelligent pigs and developed an excellent working relationship with them. One cold, fall day, Michael slowly coaxed four huge pigs in from the pasture. Rather than turn into the dark, strange barn, they rushed past my stunned husband and ran down our long lane. Instead of tearing down the lane after 200-lb. hogs, Michael simply stayed put and yelled,

The pigs stopped in their tracks, turned around and came running straight home. Michael grabbed four apples, tossed them into the barn and his pets trotted right in. 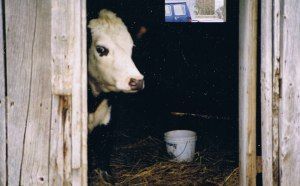 Michael’s favourite cat was Mickey, a tom cat who followed him around while he did his barn chores. Their friendship was sealed the day Mickey stood his ground on top of a fence post as a long, thick, rough cow tongue stroked his whole front, lifting him into a standing position.  Mickey simply sat back down, shook himself and stayed by Michael’s side.

I can’t forget to mention the local deer, groundhogs, raccoons, bears and mice who seemed to think our garden was grown specifically for their gourmet delight. When I also consider the sly fox who managed to steal chickens right under the nose of our sleepy guard dog, I realize how much time was spent dealing with wildlife. It took constant vigilance to keep at least a portion of our produce and livestock for our own enjoyment. Luckily we had a team of young but enthusiastic undercover agents who act like combat spies. The kids would sneak up to peek out windows, tiptoe around barns or peer through bushes throughout the day, then run excitedly back to their dad to keep him posted. Michael set up traps and escorted those pests further out into the wild.

Melanie Jean Juneau is a mother of nine children who blogs at joy of nine9. Her writing is humorous and heart-warming; thoughtful and thought-provoking. Part of her call and her witness is to write the truth about children, family, marriage and the sacredness of life. Melanie is the administrator of ACWB, the Editor in Chief at CatholicLane, CatholicStand, Catholic365 , CAPC & author of Echoes of the Divine.