I am not the type of person who stops and smells the roses. I generally plow through life, and I don’t slow down to admire all the beauty around me. It also doesn’t help that I am not an outside person at all. So because of these factors, I won’t always notice newly-bloomed flowers or all the colors in nature all around me. The designers of the card game Lotus must have had people like me in mind when they created it, because a game might be one of the only ways I’d take the time to slow down and observe the flowers. Lotus is a game for 2-4 players, ages 8+. It takes about 30 minutes to play and retails for $30.

Lotus is a very pretty card game that takes the simple action of playing cards/Guardians to create a somewhat meaty decisions of hand-management and area control. The decisions don’t seem like they would be that complex, but you have to carefully decide which cards to play each turn. Do you play one or two petals to a flower, and risk your opponent completing the flower and getting all the petal points? Do you complete a flower you don’t have majority control, foregoing a bonus token or scoring token, just so you can deny your opponent majority and completion points? These are decisions you will constantly be running through your head.

Apart from the simple and inviting nature of the rules and game play, two things make this game very family-friendly. The first thing is the artwork. The colors on these cards pop, and the flowers themselves are so life-like. After a few turns with people playing cards, it will look like the flowers are actually blooming on the table. The little wooden meeples are cute and tiny as well, which is something you don’t normally say about bug-shaped items. The second thing which makes this a good family game is that you can pay it competitively or cooperatively. Sometimes, you feel like a game where it’s every man for himself, and sometimes you feel like playing a game where you can work in tandem with a partner. This game provides both options, and the cooperative variant is a good way to teach both new and younger players.

I wasn’t sure I was going to like this game at first, as it doesn’t seem like it would be my cup of tea. However, after a few plays, the game really grew on me. (Pun intended) If you are looking for a breathtakingly beautiful game that is fun for kids, adults, new gamers, and experienced gamers, then you’ll want to pick up a copy of Lotus!

Learn more about how to set up and play the game.

Family Games: 2 card games that with big fun in a portable size. Review by @StuartsStudy 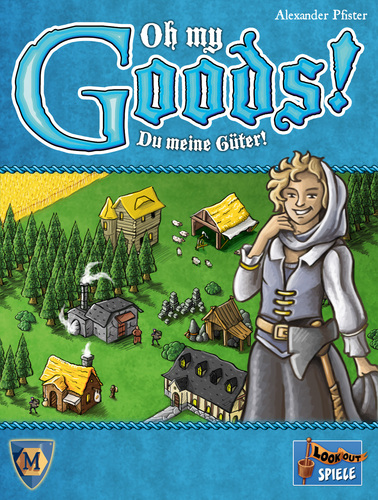 Transport yourself back in time to the Middle Ages. You are a European craftsman, trying to make the best goods possible. Oh My Goods! is a card game for 2-4 players, ages 10+. It takes about 30 minutes to play and retails for $15.00.

Within this tiny game box are 110 cards. That’s it! There’s something beautiful about a game that is only cards, but cards that serve multiple purposes. When you have a card has multiple purposes, it creates a struggle each turn on what you should use the card for. Another great aspect of the game is the “engine-building” aspect. The game feels like a puzzle at times, in that you are trying to piece together the right cards to chain actions together and produce the best score. I also like that the cards in the Market Display are communal, but non-depleting. This means that just because your opponent uses cards, they don’t take the cards away to prevent you from using them.

As for the negatives of the game, there are a couple. The first one is a petty complaint, but the name is a bit cheesy. Originally the game was called Royal Goods, which is a solid name, but it was changed. I’m not sure why, but my best guess is that it too closely resembled another game by Alexander Pfister – Port Royal. The bigger complaint I have is the ability to teach the game. On the surface, it seems like this should be a simple game to teach. However, I have tried a couple times, and I usually get blank stares when explaining the way the game is played. At that point, I stop explaining and tell them that we’ll play a couple of example rounds. That’s when it clicks for most players, but a lot of people don’t like the idea of playing blind/at a disadvantage to the person explaining the game.

These complaints aside, I find the game to be very enjoyable. It has hand management, worker placement, press your luck, and all of this from only 110 cards! With a portable size, quick play time, and low price point, this is a good game to have in your collection. I forgot to add that the cards’ text is in German and English. This might distract some people, but I took five years of German in school, so it’s like a refresher course when I play a game. I look forward to playing this game more and more and trying to unlock the best possible combination chains possible. I also can’t wait for the expansion to be printed in the U.S., because it looks like it adds a story element to the game.

Learn more about how to set up and play the game.

Your purchase of these games through our Amazon link supports CatholicMom.com.

Stuart Dunn was born and raised in Mobile, AL and received a Bachelor of Arts in Psychology and a Master of Business Administration from the University of South Alabama. Stuart primarily does accounting and logistics at the Port of Mobile. He married his wife, Mary Katherine, in 2011 and welcomed their first child into the world in 2013. Stuart reviews all things Catholic including adult books, children’s books, Bible Study series, Catholic Courses, CDs, and DVDs in addition to board games at his blog Stuart’s Study at StuartsStudy.blogspot.com.