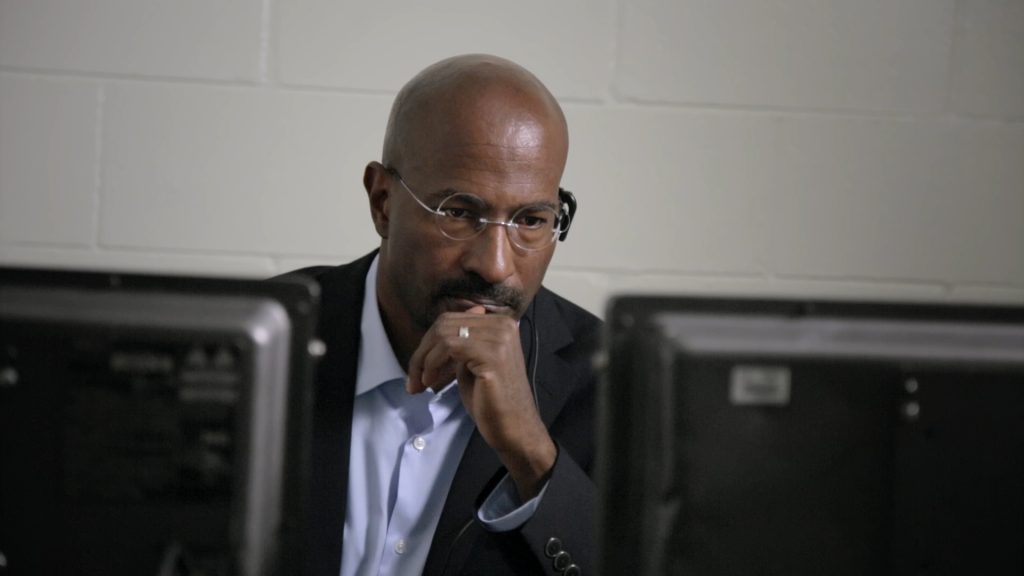 Many of us wondered what would possibly fill the Sunday 9:00 pm time slot on CNN when Anthony Bourdain’s groundbreaking show ended. For many of us, Parts Unknown was appointment television. I watched not the show because I’m a foodie. (I’m definitely not!) Rather, I tuned in for the storytelling, the characters to whom Bourdain introduced me, the window he provided into parts of the world I’ve yet to explore. I watched for the authenticity, the way the show always made me feel so deeply.

I’m happy to share that despite the loss of Mr. Bourdain, there is now a new reason to tune in and DVR on Sunday nights. Premiering last week on CNN, The Redemption Project with Van Jones is a groundbreaking look at the process of restorative justice playing out nationwide. With Jones taking us into the heart of several tragic crime stories, we sit alongside offenders and those they have impacted by the atrocities they have committed. After watching the first two episodes, I am hooked.

During my first trip to Rwanda in 2014 on the eve of the 20th anniversary of the Rwandan genocide, I began pondering the question “Is forgiveness truly possibly?” Traveling with Catholic Relief Services, I witnessed firsthand the remarkable work being done between perpetrators and survivors. I came to the conclusion that not only is reconciliation possible but that it can be perhaps the only possible path to true healing for many who have been harmed beyond comprehension. Hatred and a lack of reconciliation continue to eat at our woundedness, festering until all that is left is our brokenness.

In The Redemption Project, Van Jones is our guide for a process that enables men and women who have born hurt, pain, shame, and in some cases raw hatred for one another to sit side by side in dialogue. The results are astonishing, as is the honesty of those who take center stage in the conversations. Indeed Jones himself is transparent in the sharing of his own emotions, but never in a self-serving manner.

On their site, CNN provides the following description for the principle of Restorative Justice that guides The Redemption Project:

Restorative justice seeks to heal the harm caused by crime. Instead of focusing on retribution, it focuses on rehabilitation. At its core, it is a process that offers both victims and those who caused harm an opportunity to seek answers and accountability to begin to repair the damage caused by crime.

While Jones is compelling in his role as host of the show, the spotlight more regularly shines upon the parties who have been impacted by crime. The first episode “My Mother’s Murder” featured a remarkable dialogue between a young woman and the man who killed her mother when she was only an infant. This Sunday, the episode “A Life Forever Altered” involves an entire family:

For the past 10 years, Karen and David Stokes have been struggling to care for their daughter, Ashlee, who suffered severe cognitive and physical impairment when a drunk driver hit her when she was 15 years old. Van Jones travels to Metairie, Louisiana, just outside New Orleans, to meet with Ashlee’s parents as well as her younger sister Meghan. All four members of the Stokes family – including Ashlee — want to sit down and talk with the woman who was behind the wheel driving with an alcohol level three times the legal limit. Callan Gill spent 10 years incarcerated and had time to come to terms with her actions. She is now ready to sit down face-to-face with the family and the young woman whose life she devastated.

The Redemption Project and Mr. Jones succeed at not overdoing their messaging to favor one side or the other. The families who have agreed to participate are authentic and real in sharing that forgiveness is a process. This is hard stuff and the show doesn’t pull any punches, but it also doesn’t provide a “one size fits all approach” to reconciliation. I was especially moved by the transparency of Karen Stokes, a devastated mom who continues to struggle on a daily basis to forgive Ashlee’s offender.

As I’ve learned in my own life, sometimes reconciliation and forgiveness are a daily decision. For this reason, “The Redemption Project” feels like an especially apt title for a remarkable journey. As we walk alongside Van Jones and the courageous individuals who seek redemption, we will without a doubt learn a few lessons that will cause us to look more honestly at our own relationships and past hurts.